Somaliland is a place that doesn’t officially exist, a self-declared independent country in the Horn of Africa that is not recognized by any other nation.

But this virtually unknown country, which unlike the rest of Somalia is at peace and is not plagued by the terrorism of Al-Shabaab, is about to be thrust into the international consciousness because of one of the most devastating droughts in recent memory which is gripping the whole region.

We travelled from one end of Somaliland to the other witnessing the effects of the drought on remote rural communities.

Successive rains that the millions of rural peasants and nomads depend on to feed their livestock have failed and what is very clear is that the population now stands at the precipice of a crisis which could very easily tip from drought into something far, far worse.

The figures are startling. This is a country of just under four million people and a government with meagre resources that relies on over 70% of its income on livestock exports.

Yet of the 18 million animals Somaliland’s government and people were depending on, 10 million have died as a result of the drought.

The number of animals Somaliland relies upon for its majority export economy.

The number of animals that have died during the devastating drought.

Somaliland and the wider region are no strangers to acute droughts.

During the 20th Century a drought would occur roughly every decade.

But now they have faced three consecutive years of severe drought and that unprecedented crisis has meant that all the mechanisms that the countries in the Horn of Africa and their international partners have put together to withstand such conditions have been all but overwhelmed.

As we journeyed from Somaliland’s western border with Ethiopia near Togwachale to the far eastern border, beyond the city of Burao, we travelled across extremely remote and hard to reach settlements. 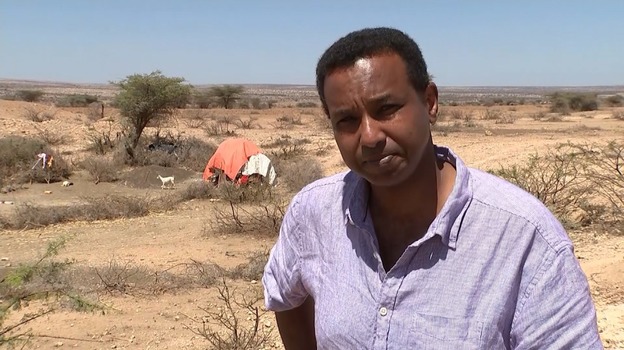 We found nomadic and herding communities who had gone from place to place with what remained of their flocks.

Everywhere we saw the dried carcasses of goats, sheep and camels.

They have gone from settled and largely self-sustaining communities to internally displaced people fleeing a natural catastrophe.

And the UK government has been the largest bilateral donor to Somaliland.

But much of their work has been developmental.

The reality is that everywhere we travelled we didn’t see any western emergency relief teams operating feeding or supplementary nutritional programmes.

Yet we came across many cases of sick and hungry children and elderly.

This is not a famine. Yet.

But what is undeniable is that the ‘Gu’ rains which are due in the next couple of weeks in Somaliland are the very last chance for the most hard-hit communities to save what is left of their flocks.

If those rains don’t come the very last few goats and sheep they had to sustain them will die and then they will have no coping mechanisms left.

That only means one thing: people will then start to die and in large numbers.

The international community is taking the very first tentative steps in trying to mobilise a response for Somaliland.

They do so knowing that the fact the country is unrecognised has been a diplomatic and bureaucratic stumbling block.

If they don’t find a way past it and start responding now they will see a preventable humanitarian catastrophe unfold in front of their eyes.

And this is not Somalia. There are not the same dire security issues as there are in the rest of Somalia as we witnessed for ourselves and, just like us, many advance teams of western aid workers and western journalists are beginning to travel across Somaliland.

The warnings of what could unfold are there for all to see.

Biden Administration Should Work With AU To Resolve Somaliland’s Status: Former US Ambassador To Somalia

Why Somaliland Deserves Recognition As A Republic

Somalia Faces Prospect Of Severing Ties With Djibouti and Malawi

Somaliland Has More Freedom Than Ethiopia, Djibouti And Somalia, Says US...