ELKHORN, Wis. — The basement room was cleared of pens with blue or black ink, items that could mar paper ballots. Anyone wearing a coat was told to leave it in the hallway, in case something nefarious was hidden underneath. Water bottles, purses and keys were placed on the floor, leaving the large plastic tables smooth and uncluttered.

And at 9 a.m., with the brisk rap of a county clerk’s wooden gavel, the first recount of the 2016 presidential election was underway in Wisconsin, with another recount pending in the neighboring battleground state of Michigan.

For the next 12 days, election officials across all 72 counties in Wisconsin will work days, nights and weekends to recount nearly three million ballots, an effort initiated and financed by Jill Stein, the Green Party presidential candidate, who has suggested that voting machines in the state could have been hacked.

Very few people expect that the recount will reverse the outcome of the election. President-elect Donald J. Trump triumphed here over Hillary Clinton by 22,177 votes, and in Michigan by 10,704 votes, a margin that a lawyer for Mrs. Clinton, Marc Elias, said had never been overcome in a recount. Legal challenges to the vote in Pennsylvania, where Mr. Trump leads by 70,638 votes, are also underway.

As Wisconsin was beginning to take another look at its votes, the efforts in Michigan and Pennsylvania remained in flux.

The Michigan secretary of state’s office announced that Mr. Trump on Thursday objected to the recount, halting plans to begin the process on Friday. Lawyers for Mr. Trump argued that Ms. Stein did not qualify to demand a recount and that it would not be finished in time for the Electoral College, which meets on Dec. 19. The board plans to hear the objection on Friday, and if it rejects it, the recount would probably commence on Tuesday.

In Pennsylvania, where Ms. Stein’s efforts have more hurdles, election officials in Philadelphia said on Thursday that, pending litigation, they would begin recounting votes in 75 precincts on Friday, a small portion of the nearly 1,700 in the city. The elections commission, though, denied a request for a full forensic audit of the city’s voting machines.

Here in Elkhorn, a city of about 10,000 people in Walworth County in southern Wisconsin, the recount began in a government building downtown, where workers approached their task with both urgency and trepidation. They are expecting to count ballots for close to 12 hours a day until the task is complete – their deadline is Dec. 12. The Electoral College will vote on Dec. 19.

“We’re going to be working long hours, but we’re going to get this done,” said Kimberly S. Bushey, the clerk for Walworth County. When a co-worker suggested that the group would be taking a lunch break at some point, she answered with a terse “Maybe.” 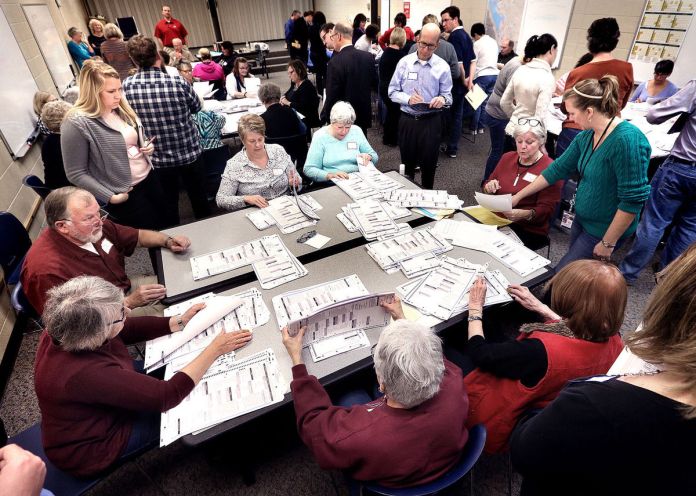 Tabulators, mostly retirees, are being paid $25 for each half day they work, and county officials say they would bring in workers as needed to count the 51,000 ballots in time.

In Wisconsin, recounts are not terribly unusual. Another vast statewide recount happened only four years ago, for a seat on the state’s Supreme Court. The recount took more than a month.

Michael Cotter, a staff member in the county clerk’s office, stood on the sidelines on Thursday morning and recalled at least three other recounts that he had taken part in, dating from a countywide do-over for a judicial seat in the spring of 2000.

“We had punch ballots back then, so I knew all about pregnant chads and hanging chads before Bush and Gore,” he said. “They kept falling out of the ballots and they were all over the floor, like confetti.”

Election officials here seemed determined to keep the process orderly. Observers were told to stay several feet away from the tabulators, on one side of the room marked off by green tape. Donna Emelity, a tabulator, said she was volunteering out of a sense of civic duty. “Wisconsin is run very honest,” she said. “I think it will prove to people that it’s an honest election and it’ll help people have more confidence.”

Representatives of the campaigns were allowed to be closer to the process, peering over the shoulders of election officials as they tested machines and used pliers to snip open white plastic sacks of ballots.

Mary Gilding, a volunteer for the Stein campaign who was there to oversee the recount, said that she did not “have a dog in this fight,” but merely wanted to ensure that the election results were accurate.

“I hope we find that there won’t be anything that went wrong in our little county,” Ms. Gilding said. “But with all that’s going on with hacking, we need to find out for sure.”

Ms. Stein has argued that counting by hand is more accurate than machine recounting, but lost a hearing on Tuesday that could have mandated a statewide hand count. That left the decision up to individual county clerks, who opted mostly for a hand count. A few said they were bowing to demands from people who found counting by machines to be suspicious; Walworth County officials said they would use a combination of counting by hand and feeding ballots into an optical scanner.

In a statement, Ms. Stein hailed the start of the recount as a “critical first step towards restoring faith in our voting system” while urging election administrators to review ballots by hand, and “not simply push a button that would repeat whatever problems may have occurred in the original tally.”

State Republicans have dismissed the recount as a stunt. Mr. Trump posted an angry response on Twitter about it this week.

Governor Walker, a Republican, has criticized the recount. “The motivations behind the recount are questionable and ultimately costly,” Tom Evenson, a spokesman, said in an email. “Governor Walker has confidence in Wisconsin’s electoral process and believes it is both fair and protected.”

Andrea Kaminski, executive director of the League of Women Voters in Wisconsin, said she did not expect the recount to change the election results in a significant way.

But she said the recount was consistent with a Wisconsin trait: “the fact that we have so darn many elections.”

“That reflects not so much our high level of civic participation, but the polarization that we’re under right now,” she said. “Right now, Wisconsin is just in a lock of polarized politics where neither side is willing to compromise.”

US Inauguration: Biden Sworn As 46th President Of The United States

Biden On Cusp Of Presidency After Gains In Pennsylvania

The U.S. Interest In Somaliland

U.S. Ready For A Change In The Horn Of Africa

Somaliland Has More Freedom Than Ethiopia, Djibouti And Somalia, Says US...

ABOUT US
The Most Reliable Media Network in Somaliland, which publishes a daily Somali language Newspaper and an English Online version. You can contact Saxafi Media Management and Editorial team, E-mail: info@saxafimedia.com | saxafinews@gmail.com Tell: +252 654411077 +252 634411077
Contact us: saxafinews@gmail.com
FOLLOW US
© Saxafi Media Network 2021, All Rights Reserved | Designed by SomSite
Loading Comments...